Manley : "Winning the hearts and minds" 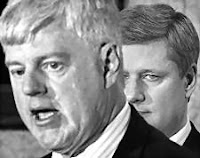 Former Liberal deputy prime minister John Manley in Tuesday's G&M : "...the Independent Panel on Canada's Future Role in Afghanistan was a roaring success. Embraced by the government, it provided the Official Opposition enough room to be able to reach a consensus with the government."

Thanks for spelling that out, John.Yes, we did realize the main purpose of your panel of hawks and deep integrationists was to give the Libs the necessary cover to be able to vote with the Cons to continue Operation Enduring Freedom. As Thomas Walkom put it back in October :

"It is not about Afghanistan. It is about the US.

In 2004, Paul Martin's Liberal government decided that the best way to keep Washington happy was to commit combat soldiers to Afghanistan.
In effect, he decided to risk Canadian lives in Kandahar to keep trucks rolling across the Detroit River. As did Harper."

But, as Manley explains, we could be doing so much more in "winning the hearts and minds"!*

"To get the needed results, we recommended that the Prime Minister personally lead a diplomatic initiative, making Canada's voice heard to a degree commensurate with our sacrifice. The objective would be not simply additional troops in Kandahar, but a comprehensive political-military plan for NATO, the UN and participating countries."

Plus that definite termination date is apparently totally negotiable :

"Afghanistan's development and governance challenges will not be fully met by 2011. Let's hope it's not necessary to create another panel in 2010 to advise on Canada's role after 2011."

*Yes, he really did say "winning the hearts and minds"

Posted by Alison at 2:31 am
Email ThisBlogThis!Share to TwitterShare to FacebookShare to Pinterest
Labels: Afghanistan, John Manley, Operation Enduring Freedom

"winning the hearts and minds"

Good Lord -- that photo! There are Harper's evil eyes, of course, but I hadn't seen Manley for a while, and boy, well ... some of us have been eating well lately, have we not?