Braidwood Inquiry - The return of the Staples Defence 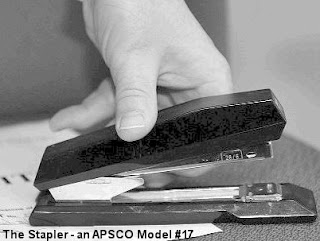 In what is now a familiar and depressing story, RCMP Cpl. Monty Robinson joined the previous officers in testifying today that he "saw a couple of staples come out" of the dreaded and terrifying stapler that Robert Dziekanski was clutching moments before he was zapped five times and died on the floor of the Vancouver airport in 2007.
.
In his initial statement to the Integrated Homicide Investigation Team, Robinson had said that Dziekanski was "swinging the stapler up high...in an attempt to hit us."
Well, so much for that.
.
Cpl. Robinson also repeated the fiction, in spite of evidence shown to the contrary on the Pritchard video, that Dziekanski failed to go down on the first TASER™ shot - hence his instructions to "Hit him again! Hit him again!". This command was actually given as Dziekanski, in the words of Justice Thomas Braidwood, "was already on the ground howling with his legs in the air."
.
Perhaps most chilling today was Robinson's excuse for ignoring the fact that after being zapped five times and held down by Robinson's knee on his back with his hands handcuffed behind his back, Dziekanski was turning blue :

"I assumed it was bruising," he said.

Live coverage of the inquiry will resume tomorrow at CBC .
.
Posted by Alison at 3:48 pm
Email ThisBlogThis!Share to TwitterShare to FacebookShare to Pinterest
Labels: Braidwood Inquiry, Monty Robinson, TASER™, the stapler defence

"I assumed it was bruising."

What the hell is wrong with these people?

The usual mode of punishing the poor slaves was, to make them take off their clothes to the bare back, and then tie their hands before them with a rope, pass the end of the rope over a beam, and draw them up till they stood on the tips of their toes. Sometimes they tied their legs together and placed a rail between. Thus prepared, the overseer proceeded to punish the poor, helpless victim. Thirty-nine was the number of lashes ordinarily inflicted for the most trifling offence.


Now days it is called pain compliance and done with tasers