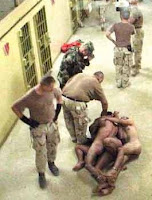 I'm not sure what is the most alarming aspect of CSIS testimony today that they will still use information that may have been obtained by torture in other countries "if lives are at stake" :

"Geoffrey O’Brian, a CSIS lawyer and advisor on operations and legislation, under questioning by the public safety committee, admitted there is no absolute ban on using intelligence that may have been obtained from countries with questionable human rights records on torture."

~ That CSIS continues to reward other countries for torture - when exactly are lives not "at stake"?
~ That they condone a practice which, in addition to being barbaric, is not even effective
~ That oversight of CSIS operations remains negligible
~ That recommendations from both the O'Connor and Iacobucci inquiries are being ignored
~ That we are now in open contravention of UN Convention Against Torture
~ That CSIS is comfortable being open about this, presumably based on the assumption there is sufficient public support
~ That about half of the 250+ public comments under a similar article at the G&M do indeed support the CSIS position, citing the necessity of preserving "republican" or "christian" or "North American" values, backed up with examples gleaned from the US TV drama 24 Hours.

Apparently in addition to condoning actions that prove we have lost the war on terrorism, we have also become a nation too stupid to safely operate a television. .
Update : When I blogged this afternoon about this, I hadn't yet watched the actual proceedings.
Well now I have.
Apparently, according to O'Brian who is very keen on quoting the British House of Lords 2005 "torture decision", "the Executive is bound to make use of all information, both coerced statements and whatever fruits they bear, to safeguard the security of the state."
And if mistakes are made? Well there's always SIRC, the Security Intelligence Review Committee and source of glowing reports about CSIS, to complain to afterwords.
And further, we should be grateful and proud of that.
.
Also, just because a country has an "abysmal" human rights record, it doesn't necessarily follow that information we receive from them is extracted by torture. In fact, usually we have no idea how information is obtained, so - not our fault.
Do we continue to share info with Egypt and Syria? Yes, we share info with 247 agencies, with caveats of course. See SIRC above.
Does the Con chair of the committee plus the five Cons on it continually interrupt with points of order and run interference for the intelligence agencies phrased as questions? You betcha.
.
Also on this one : Skdadl and Dave
.
Posted by Alison at 4:45 pm
Email ThisBlogThis!Share to TwitterShare to FacebookShare to Pinterest
Labels: Con fuckwittery, CSIS, Dennis O'Connor, Iacobucci, SIRC, torture, United Nations

Thanks very much for the video link, Alison -- great post, as always.

Y'know, when I look at Mr O'Brian's job description, another name pops into my head -- John Yoo. Mr O'Brian would be smaller fry, doing the questionable law for only one agency, but maybe we should start connecting the dots for him, given what Yoo is likely to be facing in the months and years ahead.

Oh, the anger. I'm beside myself, incoherent with rage. So now I'll go and watch the video -- that'll help.

"If I tortured and then killed an individual and found out through that process that your mother and father worked in a building going to be attacked and passed on that information to you - would you call your parents and warn them or would you out of principle not use my information because I extracted it through torture? Of course you would warn them! Now remember that every Canadian citizen is someone's mother, father, daughter, son, cousin, friend, or loved one. It is not only ridiculous to say we should ignore intelligence passed on to us if it could have been gained through torturing, but irresponsible."

AI - You're asking the wrong question.
Quite a lot of other things will have already gone wrong before you are in a position to torture anyone with the government's consent, and these are the very things that cause people to blow up buildings as a desperate form of redress against them.
The people currently in litigation against the Canadian government named names and locations to stop the torture. The information they gave was false but caused the people they named to also get picked up and tortured. And so it goes...

I think they're now trying the Fawlty excuse -- my wife made a mistake...