But first : a quiz !
Can you spot the main difference between the two pictures below?
Take your time ... don't rush it ... 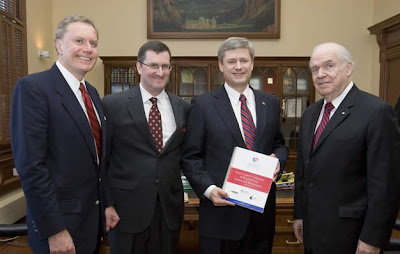 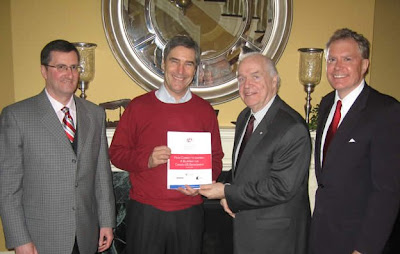 [The answer is in comments.]
.
In the top picture, Harper is holding the latest Canadian foray into deep integration : From Correct to Inspired : A Blueprint for Canada-US Engagement from the Canada-US Project.


Contributors to the "blueprint" include Thomas D'Aquino of the Canadian Council of Chief Executives; Perrin Beatty of the Canadian Chamber of Commerce; three former American ambassadors to Canada : David Wilkins, James Blanchard, and Gordon Giffin; and serial Canada-basher Michael "Canada blew it!" Hart.

.
"Blueprint" authors Fen Hampson and Michael "Canada blew it!" Hart appeared before the Standing Committee on Foreign Affairs and International Development on Feb 23 to complain that the Canada - US relationship has :

"an awful lot of informal, below-the-radar relationships," Mr. Hart said.
"I mean hundreds of relationships among officials and so on, but none of that is provided with a kind of from-the-top political guidance as to what the objectives are."

The two professors went on to say Canada must redefine its relationship with the U.S. in a way that will strengthen security but also enhance trade. Ideally, they recommended broadening, among other things, NORAD to create a secure land, sea and air perimeter around North America, while dropping the national border to create a Schengen-type arrangement.

The Schengen Area is a group of twenty-five European countries which have abolished all border controls between each other.

.
Two days later Thomas d'Aquino of the Canadian Council of Chief Executives told the Commons' Foreign Affairs committee on Feb. 25 that the North American Security and Prosperity Partnership "is probably dead." However something else will inevitably replace it, he said.
.
The Canada-US Project is certainly making a good run at it.
Here's some random quotes from their above-mentioned "Blueprint for Canada-US Engagement" :


Apparently their polls that show that "95% of Canadians desire the federal government to have a closer relationship with the US", hindered only by "the chattering classes" - a rather odd reference given that co-author Derek Burney is Chairman of the Board of Canwest Global Communications Corp. - but doesn't all this sound like a blueprint for SPP on steroids to you?

Fen Osler Hampson is wearing a different suit and tie.