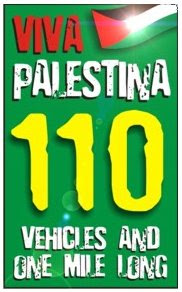 It would be quite something to see, wouldn't it?
The firetruck donated by the Fire Brigade Union in Manchester leading the now three miles long convoy of ambulances and trucks across the desert of North Africa from the UK to Gaza.
As Skdadl says : Now, THAT is a motorcade!
.
You'd think the western media would be all over a story about ordinary people collecting a cool £1-million worth of humanitarian aid and setting out on a 5000 mile epic crusade with no assurances that they would even be allowed into Gaza once they got there.
.
Well they aren't all over it. They're ignoring it. Completely.
.
Author Alice Walker and 60 members of the anti-war group Code Pink got a mention in the Boston Herald as they waited to enter Gaza today - and good for them! - but Viva Palestina? Nothing. Cowards.
.
News from the convoy on the road into Alexandria :

"every single house has had two police officers guarding the front with their backs towards the road making sure nobody is watching the convoy, to the extent that even areas of barren land police scatter to make sure children dont run up towards the vehicles, clearly not for road safety, but censorship ... it’s crazy, every mosque we’ve driven past has been barricaded to stop people looking "

We get why this is difficult for Egypt, third highest recipient of US aid after Iraq and Israel.
But what's the western media's excuse?
.
Update : The Scottish medical aid convoy was permitted to enter Gaza from Egypt at Rafah today ahead of the others, so it looks like it's actually gonna happen. The rest of the convoy arrives tomorrow.
.
Sunday night update : Shit. A glitch. Israel is apparently insisting that the convoy detour around and enter Gaza via Israel instead. This change of plan is obviously not acceptable to the convoy. There is also some problem with allowing the fire engine, the generator and the boat to enter. Currently George Galloway is standing firm that Egypt allow the entire convoy to enter Gaza directly from Egypt. So now we wait and see what happens tomorrow.

I shared your post at at least a half dozen progressive blogs, including Crooks and Liars, Americablog, Firedoglake and others, suggesting it was a noteworthy cause to emention. Nothing. So it's not just the MSM. For some reason this story has entered a black hole.

Yes! It should be Front Page.
The best news in a long time!
I emailed CBC about it, last week.Will try again today with the Current, since there were some stories on Gaza this week.
Will send to As it Happens too!

Have decided to also phone in on their Talk Back lines.
They definitely check those messages.

Maybe they should launch a few bottle rockets off the top of the fire engine.
Then you would get front page coverage about the "Pro-Hamas Convoy of Terror" and how they are an "existential threat to benevolent Israel."

I could see the headlines now "Anti-Semitic Wagon Train of Terror".

Not to be a knob but c'mon folks you know our useless media is controlled, censored and deliberate with its story framing.
Palestinians, Arabs and Muslims are clearly the expendable subhumans of the Western Media narrative. Unless they can find funding ties to the latest "previously unknown" group of Jihadist false flag bogeymen or some other smear tactic this group of humans helping humans will be thoroughly ignored.
To acknowledge them is to acknowledge the systematic crimes against humanity consistently perpetuated by Israel.
And then of course we would all be treated the inculcating deluge of holocaust (TM) stories that would automatically follow.

The zombie lemmings of Canada are too deeply invested in our "Shared Values(TM)" with the Apartheid Terror State.