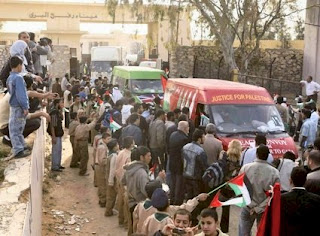 Viva Palestina! website : "And they entered side by side like heroes, some on foot some in their vehicles, tears, smiles, hugs, flowers. It was historic, it was legendary."
The fire truck, generator, and boat have been forced to do the detour through Israel first to be searched but the rest of the convoy is in!
.
And some media coverage is finally kicking in :
BBC : UK aid convoy crosses into Gaza
"Part of a 99-vehicle convoy bringing medicine, food, clothing and toys from the UK has reached Gaza after a 24-day journey through Europe and Africa."
.
G&M :

"They are organic farmers, art gallery owners, writers and activists - regular people. And this week they are doing what Foreign Minister Lawrence Cannon would not do on his trip to the Middle East last week: They're visiting the war-ravaged Hamas-controlled Gaza Strip.

The visitors include Pulitzer Prize-winning author Alice Walker and about 60 other people who arrived over the weekend ..."

"A 300-person convoy called VivaPalestina and led by the controversial British MP George Galloway arrived yesterday at the Rafah crossing."

That's it? Yeah, ok, well thanks for that I guess, G&M.
The G&M article does a rather better job covering Kim Elliott of Rabble, who's own coverage here is even better : I hadn't known that Rachel Corrie's parents were also going - it's been six years since 23 year old Rachel was killed by an IDF bulldozer in Gaza. CodePink and Sandra Ruch of Women's Coalition for Peace in Israel and Independent Jewish Voices in Canada also get a one-line G&M mention.
.
None of these activists imagine that the humanitarian aid they are bringing is more than a drop in a bucket that requires a thousand times more in the way of daily supplies of fresh water, food, fuel and medical supplies to Gaza. The point is to build pressure on the various complicit governments like ours who refuse to acknowledge their part in the crisis. But as Alice Walker put it :

"All great changes come from minorities - in fact, they usually come from two to three people."

I liked the part about the Gazans handing them their babies to hold as they entered Gaza.Now that's trust! A beautiful gesture.
I emailed every CBC program asking for coverage. No response.
Speaking of changes: I attended this Saturday at UVic, the Remaking the Economy gathering put on by BC Institute for Cooperative Studies and Bc Community Economic Development Network. Report is that co-ops are thriving. Particularly the ones that didnt diversify their profits into other investment funds and chose to support other co-ops or reinvest in themselves.
Credit unions are just fine. Ralph Nader reports on this too.
Communities are where its at.Forget Wall St. Community capital pools pay off!
Dr. James Tully says "people should have invested in all those little micro projects throughout the world. They are blooming.
Here's hoping aid to Gaza starts worker coops.And credit unions.

Thanks, O, I will look that UVic conference up. Yes, communities are where it's at.

I'm a big fan of person-to-person loan facilitators like Kiva too. One loan every 20 seconds now! There is a Gaza page if you're interested.