Cons to bring back anti-terrorism powers 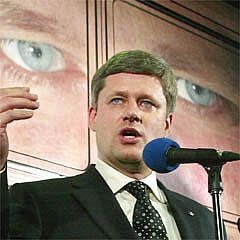 Last night Justice Minister Rob Nicholson gave notice the
Cons will reintroduce extraordinary police and judicial powers from the Anti-Terrorism Act that would :

1)Give police the power to make preventive arrests, without a warrant, of anyone authorities fear might commit a future terrorist attack, and

2)Give judges the power to compel testimony at secret investigative hearings from anyone the authorities think might know something about terrorism, or risk jail.

After 9/11, the Liberals brought in Canada's first Anti-Terrorism Act in December 2001. It included these two provisions but with a five year sunset clause. As they were about to expire, the Cons tried to extend them but the opposition parties combined to prevent it.

Explaining the Liberal change of heart against the provisions in Feb. 2007, then deputy Liberal leader Michael Ignatieff argued that "the curtailment of civil liberties can only be justified under emergency provisions and when public safety absolutely requires it".

"If this is the test," he said, "the clauses should sunset because they have not proven absolutely necessary to public safety. The government, in essence, has not proven its case and on these questions where our liberties are at stake the government has to prove the case of public necessity beyond a shadow of a doubt."

In March 2008, the Libs changed their minds once again and came out in support of them, after oversight changes were included :

"We recognize that this is necessary," public safety critic Ujjal Dosanjh said. "Other countries have much more stringent laws."

Against whom? Olympics 2010 protesters? Native activists? Some poor schmuck at a fat camp?

So, human rights specialist Michael Ignatieff, how will you greet this newest attack on our civil liberties on Thursday?

Posted by Alison at 1:42 am
Email ThisBlogThis!Share to TwitterShare to FacebookShare to Pinterest
Labels: Anti-Terrorism Act, Ignatieff, war on terra