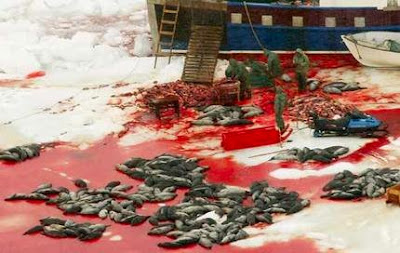 Last week Vladimir Putin banned the killing of baby harp seals under a year old in Russian waters, calling it "bloody industry" that "should have been banned a long time ago."
The Russian ban effectively ends commercial seal hunting in that country, as most of the market for pelts comes from seals less than a year old. The quota had previously been set at 35,000.
In Canada we've upped our quota by 55,000 to 338,200 seals from last year.
According to Fisheries and Oceans Canada :

Seals are not usually hunted until they reach the "beater" stage of development at around 25 days old.
Approximately 1% of the total population of Newfoundland and Labrador derive income from sealing.

Greenland and Norway combine for an annual catch of less than 50,000.
The European Union is expected to ban imports of seal products this spring.
.
Posted by Alison at 6:04 am
Email ThisBlogThis!Share to TwitterShare to FacebookShare to Pinterest
Labels: seal hunt

There are many names to describe the colour red.
No we have a new one:Baby Seal Red