Does this poll make my bias look fat? 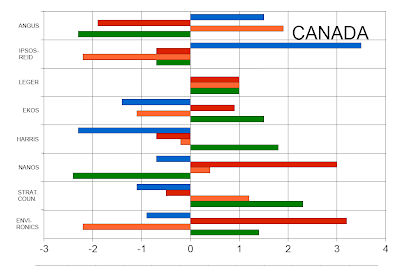 Back in November, Three HundredEight . com published this chart illustrating what he called "the house effect" Note that the chart does not measure accuracy compared to actual election results nor does Éric claim his methodology is immune from its own 'house effects':


"The numbers are the amount of percentage points a particular pollster favours or disfavours that particular party compared to other pollsters over a similar period of time.

This does not necessarily equate to a deliberate bias, but instead is more reflective of the polling methods used - the "house effects".

OK, so bearing all that in mind ... Toronto Star : NDP moves into tie with Liberals: Poll
and are polling second place behind the Bloc in Quebec.

That would be Angus Reid, but if their poll is born out even to a lesser extent by other pollsters - and depending on the kind of skewed media coverage it gets : holy shit, TorStar! - it's certainly going to throw a fuck into the perennial "Vote Liberal so the Cons don't get in" meme, isn't it?

Which, btw, is a silly meme anyhow. We don't vote federally, we vote locally. If you're going to attempt to vote strategically, vote for the party most likely to beat the Cons in your own riding. If you're absolutely sure the second party back has no hope of beating them, vote your heart.

Dr. Dawg : A vote for the Liberals is ...
.
Posted by Alison at 6:01 am
Email ThisBlogThis!Share to TwitterShare to FacebookShare to Pinterest
Labels: Election 2011, NDP, polls

"Ignatieff has made the pitch that the Liberals are the only party that can stop Conservative Leader Stephen Harper.

But it's that history of governing that Layton is trying to use against the Liberals.

"There is a virtual tie in the preferred Prime Minister question, with large proportions of Canadians choosing either Harper (28%) or Layton (27%) for the country’s top political job. Ignatieff is a distant third with 13 per cent, while Duceppe and May are in single digits.

Layton is clearly a popular choice for younger Canadians and Quebecers, while Harper remains dominant in Alberta, the Prairies, and among respondents over the age of 55."