That's all I got. It's a tweet from Robert Fife at CTV on a new Angus Reid poll.
Back with links and graphs when they become available.

Update : OK, a few details in now from the Montreal Gazette, although no data as yet.
An online poll of 2,040 Canadians on April 25&26 : "If a federal election were held tomorrow, which one of the following parties would you be most likely to support in your constituency?"

NDP favoured by 30 per cent of Canadians: poll

"Now the NDP surge has become more solid, with marked increases in Quebec and Ontario, and a higher level of committed voters who say they will not change their mind before election day," the poll said.

The Conservatives were first in every region, except Quebec, but the NDP was polling second in B.C., Alberta, Manitoba/Saskatchewan and Atlantic Canada.

The Liberals were second in Ontario and third in every other region.

The Bloc Quebecois had seven per cent support nationally, down two points. They were at 29 per cent in Quebec, second to the NDP's staggering 38 per cent. 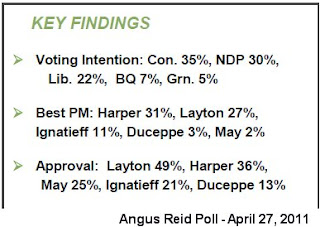 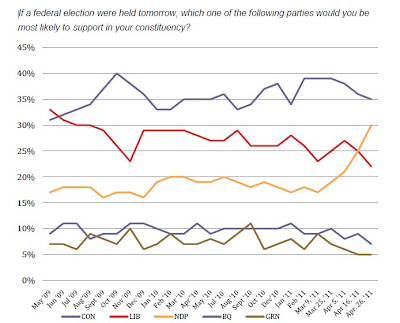 The Grits are holding on to just 64 per cent of their voters in the 2008 election, and one-in-four of these voters who supported the Stéphane Dion-led Liberals in 2008 are now backing the NDP.

The idea of a coalition government featuring the Liberals and the NDP, if these two parties have more combined seats than the Tories, is appealing to 41 per cent of Canadians. Grit and NDP supporters like this scenario, but four-in-five Tories reject it.
.
Posted by Alison at 7:39 pm
Email ThisBlogThis!Share to TwitterShare to FacebookShare to Pinterest
Labels: Election 2011, polls

But in the mean time, let's go for it! Whoo!