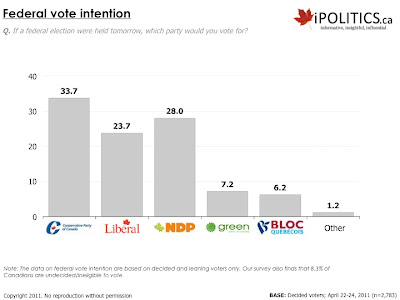 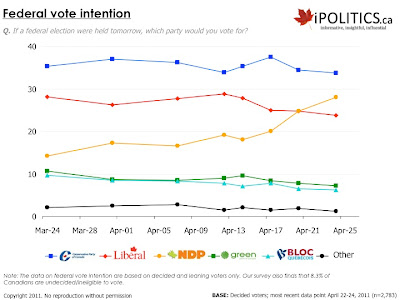 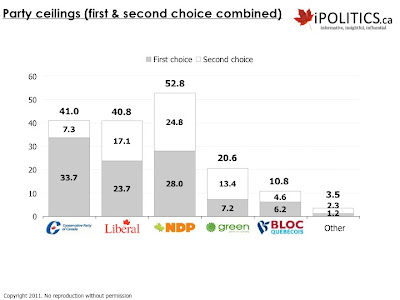 EKOS poll surveyed 3,004 Canadians, including 2,783 decided voters, between April 22 and April 24.
8% were undecided or ineligible.

A poll is only a poll is only a poll. But if it has any basis in reality and holds for the final week, we are now looking at a Con minority of 131 seats, with 100 NDP seats plus 62 Lib seats giving a 31 seat lead over the Cons. [Ed. Seat estimates revised]

Where is the original data for this poll?

This is one hell of an election.

It sure is, Boris, and to think this is Steve's "unwanted election".

And now today we have Shit Steve Actually Said.

Is this for real? EKOS seems to be having difficulty in their summation spelling "British ColUmbia".

I was talking to a friend earlier who voted at an advance poll. She said some of the veteran staff had never seen it so busy. We might be in for a surprise turnout come the 2nd...


My name is Barbara O’Brien and I am a political blogger. Just had a question about your blog and couldn’t find an email—please get back to me as soon as you can (barbaraobrien(at)maacenter.org)

I attended an all candidates meeting in Kelowna last night and was greatly disheartened by what I observed.

The PC candidate never once answered directly a question that was put to him. On three occasions he told an outright untruth and was applauded heartily by the largely PC audience.

The Greens and NDP were not convincing or persuading.

The Liberal candidate had the best resume' of all the candidates but off platform seemed unaware of pressing issues. She was a medical support worker but did not know who Mary Ellen Turpel-Lafond was.

I engaged a young college couple, he a conservative, she a green/liberal and a phd candidate.
He was aware that the Harper government was problemmatical(sp?), but was intent on voting PC because he thought the local mp was doing a creditable job. She was not sure.

All candidates agreed that we should sreamline the process for foreign doctors to practice here(so they wouldn't have to be taxi drivers), but when I suggested that we ought not to be recruiting foreign doctors because who then would be looking after the sick and injured in their countries. They had no answer.

With the current first past the post, party controlled political system we now have, our democracy will cease to be a democracy in very short order.