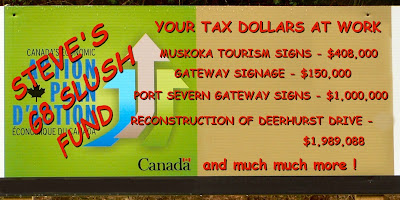 When the G8 leaders stayed for one night at the Deerhurst Resort as part of the G8/G20 $1.2-billion bunfest, their one-night stay probably didn't afford them the opportunity to fully appreciate all the benefits of the G8 Legacy Infrastructure Slush Fund spent in Industry Minister Tony Clement's riding.

"32 projects that received funding, many of which appear to have no connection to the needs of the G8 summit, chosen by Industry Minister Tony Clement, the mayor of Hunstville, and the general manager of Deerhurst Resort"

The (Jan. 13th) draft report says that in November 2009, the government tabled supplementary spending estimates which requested $83 million for a Border Infrastructure Fund aimed at reducing congestion at border crossings. But the government did not reveal that it intended to devote $50 million of that money to a G8 legacy fund, even though Huntsville is nowhere near the Canada-U.S. border.

Also ... Auditor general Sheila Fraser is not pleased the Cons misquoted her about the G8 slush fund the day Parliament dissolved last month. Their dissenting opinion to the committee report to the House read :

The Auditor General, Sheila Fraser commented in this regard the following: "We found that the processes and controls around that were very good, and that the monies were spent as they were intended to be spent."

Fraser said the quote had nothing to do with the summits. Instead, the Conservatives falsely recycled an old comment she made on security spending by a previous Liberal government after the 9/11 terrorist attacks a decade ago. (emphasis mine)

Oh well, at least we still have all those nice Economic Action Plan signs.

"The document suggests Mr. Page gave security costs for the summits a passing grade after they were held, when in fact the quotation the Conservatives attribute to him was plucked from a report on government estimates he prepared before the meetings."

Yeah. Steve the Economist wants this election to be all about the economy and the Cons' supposed record for solid fiscal management. Yet their best rebuttal to a committee report critical of that record at the G8/20 is to appropriate a ten year old positive assessment that was actually about the Libs and a quote the PBO issued before the summits even began. .
Posted by Alison at 3:28 pm
Email ThisBlogThis!Share to TwitterShare to FacebookShare to Pinterest
Labels: AG Sheila Fraser, Economic Action Plan, Election 2011, G8, slush fund, Tony Clement

Stockwell Day, a member of the Harper cabinet who is not running for re-election, said Fraser was quoted in error and the Conservatives "unequivocally apologize."

Key words: (Doris) who is not running for re-election

Yeah, stevie, throw out the ones who don't have a thing to lose to do your dirty work. Maybe it's time for you to do another "Piano Man" photo op to distract the MSM - That seems to have worked quite well for you in the past.

Harper is a snake in the grass. If he were to win a majority, we can kiss Canada good-bye. It amazes me, people just don't see through him. They don't see his dirty tactics. He prorogued Parliament twice in one year. Too much of a coward, to take the heat, he created himself.

Never in all my many years, have I ever seen Canada so disgraced. His arrogance, reneging on promises, has caused the loss of respect, from many country's.

Canada has been a peacekeeping nation, since WW11. Harper has now involved Canada in two wars. Canadians were always welcomed in every country. Harper has destroyed Canada's, good and decent image.

Now his Conservative government, is held in contempt by the Federal House, on more than one count. Harper is rabid and frantic to win this next election. We Canadians are in deadly peril, if he does.

Canada has been threatened by terrorists, because of our presence in the war, with Afghanistan. Way to go Stevie, I remember you had bad words for Iran too. You are a war monger.

Funny, i don't remember that being their campaign slogan in 2006.

I think too many Canadians need to be schooled on the meaning of CONTEMPT.

Every move Harper has made while PM reeks of CONTEMPT - for Parliament, for women, for LGBT, for Palestinian sympathizers, for the poor, for science, for immigrants, etc.