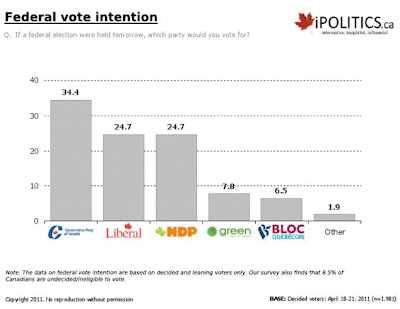 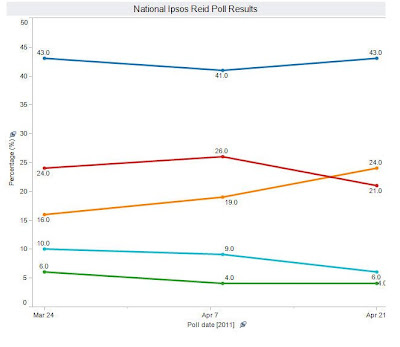 EKOS and Ipsos Reid polls - just a snapshot in time of what a few thousand Canadians think today .
EKOS seat projections : Cons - 134 seats, down from 143, so no majority
Libs - 82 seats, up from 77
NDP - 60 seats, up from 36
Bloc - 32 seats, down from 47
.
Ipsos Reid poll puts the NDP ahead of the Libs nationally
and in Quebec : NDP : 28% ; Bloc : 27% ; Cons : 24% ; Libs : 20%
House Effect : Surprise. Ipsos Reid notable for usually massively overestimating Cons and underestimating NDP compared to other polling companies, rather like every political pundit and talking head in the country to date.
.
Posted by Alison at 11:25 pm
Email ThisBlogThis!Share to TwitterShare to FacebookShare to Pinterest
Labels: Election 2011, polls

Hey, when the Dippers take Quebec, Harper can call them the Socialist Separatists!