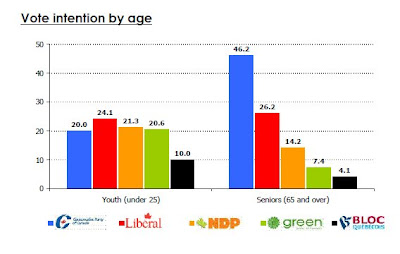 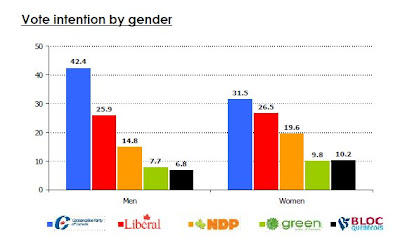 Update : "Surprise. We are voting" Good on you, Canadian youth.

Meanwhile Steve's handlers throw a couple of 19 year old first time voters out of a Con rally after they discovered one of them had a picture of herself with Iggy posted on her facebook page. Because it would obviously be a really really bad thing if she were to check out all the parties first before voting.
Another student is arrested for walking across a parking lot to his car while not being one of the many other Con supporters in the parking lot and yet another student is reportedly "barred because she had participated with the Sierra youth coalition on climate change at the Cancun conference last December".
Can't have that.
Several students who were participants in the non-partisan "Surprise. Youth are voting" flash mob outside the Con rally in Guelph were refused entry into the Con rally afterwards by the RCMP despite having registered for it :

"A Conservative Party of Canada official approached them and indicated they were not welcome because of their involvement in an action that was perceived as a protest by party insiders".

Cross your fingers that this poll is as inaccurate as most of 'em are.

Surprising: Women favour the reformaTories?!? Gun-totin' Cro-Magnon men I can see voting for Troglodytes, but women? Thought they were smarter than that . . . .

Stephen Harper cares more about your Facebook friends than about his Chief of Staff's criminal record.

With all this news about the Conservatives tactics and way they go around blaming others and such, why would anyone consider still voting for Harper? I know there aren't a lot of options, but I think many of us agree that Harper needs to go... somehow...

hi Alison...you know when I look at the charts I can't help but note than even in the seniors category, if the progressives belonged to one party we'd still have more support than the Cons. We'll be able to explain a lot of things to future generations, but we'll never be able to explain that one...

CD : Not at all certain that it's going to happen.

Anon : Stephen Harper cares more about the bumper sticker on your car than the criminal records of his friends.
If RCMP topdog William Elliott was the one who ok'd Bruce Carson for security clearance in 2006 and is the same guy Steve asked to investigate Bruce Carson last month, you have to wonder if it was why he was appointed to PCO security in the first place.

If I recall, they managed to detain a little over a thousand people who happened show up or simply be in the neighbourhood of one of their political stunts last year. I'm almost surprised they haven't booted more people.