Surprise! We Are Voting! No You Aren't! 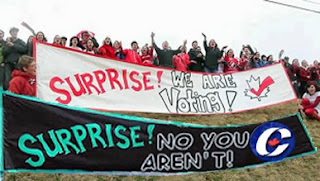 (updated below)
You really have to wonder what was going through the head of Michael Sona, communications director for Guelph Conservative candidate Marty Burke, when he barged into the special advance ballot arranged by Elections Canada for students at Guelph University, "making a huge scene stating that this polling station was illegal and tried to grab for the ballot box."

Maybe he thought the two previously successful federal election polls held at U of G were quite enough. Maybe he saw another party's ads too close to the polling station. Maybe, like John Baird, he found all this 'get out the youth vote' flash mob stuff to be "disconcerting".

Or just maybe he realized there was no friggin way there was anything like a majority of Con votes among those 700 sealed votes in those ballot boxes. In which case - interesting he would cop to that.

Guelph was also where the original non-partisan vote mob was held on April 4th in response to Rick Mercer's challenge to young people to "do the unexpected" and get out and vote.

The Cons didn't much care for that one either :


Several students who were participants in the non-partisan "Surprise! Youth are voting!" flash mob outside the Con rally in Guelph were refused entry into the Con rally afterwards by the RCMP despite having registered for it :

"A Conservative Party of Canada official approached them and indicated they were not welcome because of their involvement in an action that was perceived as a protest by party insiders".

Now the Conservative Party of Canada has written to Elections Canada yesterday to disqualify the Guelph students' votes :


"request that none of the votes collected during the U of G session be included in the final tally of votes in the Guelph riding. The letter was sent by lawyer Arthur Hamilton, of Toronto-based law firm, Cassels Brock."

[Say, aren't you the same Con lawyer who dished the dirt on Helena Guergis? ]


"Elections Canada media advisor James Hale said this was the third election during which the university of Guelph held a special ballot on campus. And this is the first time it’s ever been challenged, Hale said."

Well you know the Cons aren't overly fond of Elections Canada either at the moment.

Meanwhile the Vote Mobs : Youth are voting this election! rolls on across the country. Watch their vids. Pretty inspiring stuff.

The Guelph ballot collection was not technically an advance poll but rather a way to collect a batch of 'special' ballots which are put in sealed envelopes and then the students' names will then be checked against the voters list on May 2. So to answer Con lawyer's complaint - proximity of election ads to collection box presumably even not an issue.  Former DRO James Bow explains it at Dr. Dawg's.


"A special ballot coordinator, appointed by the local returning officer, oversaw the activities at the University of Guelph. All information at our disposal indicates that the votes were cast in a manner that respects the Canada Elections Act and are valid."

So the Guelph campus vote has been validated by Elections Canada, however EC has ruled against future ballot collection sessions on campus instead of at the local EC office.

Score one for the Cons here. Remember this was the third election that such a ballot collection session was held on Guelph campus to enable students in the middle of exams to vote. Con operative makes a grab for the ballot box, Con Party sends off lawyery letter, and now EC has clarified against any other campus doing this for students in future in this election.

They really are the Contempt party, aren't they?
.
Saturday Night Update : Elections Canada Senior General Counsel issues what appears to be a mild rebuke of the Con spin :


"In his letter, Mr. Hamilton refers to calls that were placed yesterday to the Public Inquiries unit regarding the situation at Guelph University and the statements made by Mr. Boutet who tried to assist him. I have spoken to Mr. Boutet and he indicated that he had not understood the situation as described in Mr. Hamilton's letter."

I'll believe it when I see it.

As to the Conthuggery...its the way of the future. Year 2 of a Harper majority will see people having their reputations destroyed by agents of the federal government because they generated too much anti-Harper sentiment. And Canadians won't be too upset by that either.

You read it here first.

U of Guelph had two vote mobs and I think it was the second one that took place just before Harper's Conservative rally. And remember that two or maybe more students were in the news as being turned away from the Conservative rally at Guelph:

Here's the second vote mob (I love that music):

What I meant to add was that vindictive Harper might have reason for wanting to punish the students at Guelph by disenfranchising them.

On the other hand that officious idiot Sona might have been reacting on his own to those events. But then, with Harper's lawyer getting involved, it seems less likely doesn't it?

Thanks, Holly. That second Guelph mob vote rally is my favorite too - unfortunately not embedable but linked at Vote Mob in post.

Cons refusing entry to a half dozen students and arresting one! are linked in the post at Cons didn't much care for that one either.

See post update. The Guelph votes will count but Con shenanigans appear to have successfully shut down future special vote collection sessions on campus unless EC further clarifies how it could be done.

Video urges students not to vote.
That's great! Thanks again.

Kev : I agree that's the important point here. Not sure why others are seeing this as a victory for anyone other than the Cons.

I don't think this was a victory for the Conservatives; far from it. Elections Canada has ruled that the ballots will be counted. And while they say that the special ballot poll was done without their sanction by a "well intentioned returning officer", suggesting that no such campus events will occur during this election, how many campus events were planned at this point?

Whether this is a victory for the Conservatives or not depends on how people react. There are good opportunities to turn this event to the students' advantage. It remains legal to walk down to your local Elections Canada office and ask for a special ballot. In the case of many universities, like UW and Wilfred Laurier, said offices are pretty close by. Guelph's office is clear across town, but you can make an event out of this: get students to gather at some prearranged time and "Walk to Vote".

Point out that democracy is worth walking for. Actually, it's worth marching for. Point out that those students' grandparents and great grandparents marched for democracy as well, some of them in much harsher conditions. Now the time has come for them to march as well.

Tell this to your friends. Get the word out.

I had wrongly interpreted EC's injunction against campus ballot collection to refer to all future elections and not just this one.

Mr. Harper, How Do You Sleep?

Another song on Lennon's 1971 album Imagine is "How Do You Sleep?",
directed at Paul McCartney (www.youtube.com/watch?v=LNjTPZW7GCU).

Once you're familiar with the melody, try these new lyrics. All together now!

Mr. Harper, How Do You Sleep?

So the contempt vote took you by surprise
You better see through the people's eyes
Those guys were right on the price of the jets
Cost twice as much but what about our vets
How do you sleep?
Ah, how do you sleep at night?

You made coalition a dirty word
Most Parliaments have them, haven't you heard?
Policies favoured by most in their land
More moderate than left and right demand
How do you sleep?
Ah, how do you sleep at night?

Prorogue the Parliament, twice down the drain
Can't hear Afghan detainees scream in pain
Large tax cuts for the largest companies
And for the Tar Sands boys more subsidies
How do you sleep?
Ah, how do you sleep at night?

At the climate talks, what do we have here
Four times awarded Fossil of the Year
Those Action Plan ads cost twenty-six mill
The G8 and 20, over one bill
How do you sleep?
Ah, how do you sleep at night?

Why did you lose the seat at the U.N.?
Who inserted the word 'not' with a pen?
Five times Bruce Carson convicted of fraud
Then secret clearance in a PMO job
How do you sleep?
Ah, how do you sleep at night?

Only five questions, 'cause you are the king
Jump when reporters ask you anything
You keep them more than forty feet away
Behind steel fences, just another day
How do you sleep?
Ah, how do you sleep at night?

You challenge Michael to a face-to-face
He tell you any time, any place
Next day you say that it can't be done
You'll just abide by the consortium
How do you sleep?
Ah, how do you sleep at night?

Get back on the 'rights' track says Amnesty
And how do you define democracy?
Your London rally, two students kicked out
'Cause of a picture on a Facebook account
How do you sleep?
Ah, how do you sleep at night?

The AG's words recycled by mistake
But who says he's sorry for that fake lake
Why does food with GMOs get no blame
Why is Helena the one you can't name?
How do you sleep?
Ah, how do you sleep at night?

Getting Back on the 'Rights' Track
(www.amnesty.ca/files/HRA.pdf)

Are we going to reward contempt of Parliament?
(www.ottawacitizen.com/story_print.html?id=4564215&)

The Government of Canada's record on climate change
(www.climateactionnetwork.ca/e/news/2011/release/index.php?WEBYEP_DI=8)

Apologies, David, you were stuck in Blogger's bossy spam filter.
Well done, and with citations to boot! Have you considered singing it on Youtube?

btw, forgive my nosiness but are you David Buckna the creationist?

I sent the lyrics to Arcade Fire's manager. If the band records it and posts a video on Youtube, it would go viral!!!