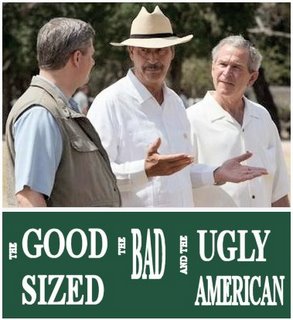 The Canadian press was very quiet about the Cancun summit today.
Fortunately, the American papers are full of it...
but not as 'full of it' as usual.
From the Miami Herald : italics mine

" Bush will find soul mate in Canada's Harper
While meeting in Cancún, Mexico, President Bush should find he has a lot in common with Canada's new prime minister, Stephen Harper.
CANCUN, Mexico - President Bush arrives in Cancún today for a two-day summit with Mexican President Vicente Fox and new conservative Canadian Prime Minister Stephen Harper, a political soul mate who is bent on improving his country's frosty relations with Washington.
While talks with Fox about immigration are expected to dominate the session at this Yucatán vacation resort, Harper will be pushing his own agenda, and when Bush sits down with him on Thursday, he'll see a mirror image of himself.
Harper, a 46-year-old economist, rose to Canada's highest office by talking about his religious faith, vowing to cut taxes and end government corruption and promising to reconsider a same-sex marriage law that Canada's Parliament approved last June -- all themes that Bush campaigned on in 2000 and 2004.
In addition, Harper said he'll consider the White House's offer for Canada to join in fielding a continental ballistic missile shield, an invitation that former Canadian Prime Minister Paul Martin rejected.
''If George Bush can't get along with Stephen Harper, he can't get along with any world leader,'' said David Taras, a political science professor at the University of Calgary. ``They're ideological cousins, if not twins.''
Sworn into office last month, Harper borrowed a page from Bush's playbook and secretly traveled to Afghanistan earlier this month to meet with Canadian troops, highlight his country's contribution to the war on terrorism and buck up domestic support for the mission.
The trip also sent a message to Washington, according to John Hulsman, an analyst for the Heritage Foundation, a conservative think tank.
''That was to show the cavalry is back in town, that they're not going to be anti-American,'' he said. ``Harper, like Bush, has a black-and-white, good-and-evil view of the world -- they're cut from the same cloth."

Now why can't we get great press coverage like that in Canada?
Posted by Alison at 8:33 pm
Email ThisBlogThis!Share to TwitterShare to FacebookShare to Pinterest

EPV & twins! lol
Someone posted a comment elsewhere that they thought it very brave of Harper to go abroad in his third trimester.

Now why can't we get great press coverage like that in Canada?