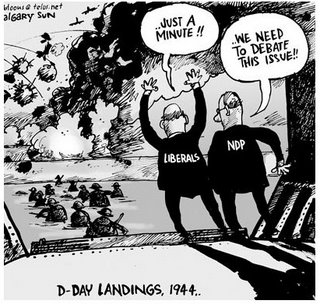 Cathie from Canada raises some issues about this Calgary Sun cartoon,
so I fixed it up a bit : 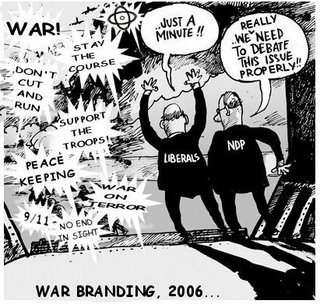 Posted by Alison at 2:39 am
Email ThisBlogThis!Share to TwitterShare to FacebookShare to Pinterest

I was watching a Canadian colonel bing interviewed about our troops in Afghanistan, on CBC last night. I was struck by the language used. On being asked what Afghanistan would be like if our troops wern't there, he said, "There would be alot of blood." He went on to say that our troops were there to, "force peace on the people." Don't you love the irony of those statements?

there is a big difference between Iraq and Afghanistan. Afghanistan is likely to manage a stable, democratic government in the near future, though until the remaining Taliban are rooted out, the chance of civil war will remain. Afghanistan is winnable for the west right now. If we continue to emphasize reconstruction and respect for human rights while agressively pursuing the Taliban and offering economic alternatives to growing poppies (rather than sending people to Guantanmo on the say so of some warlord) the Karzai govt will eventually be able to stand on its own two feet. Progress is being made there. Life in the capital is improving and the countryside is becoming gradually more secure.

Of course that doesn't mean the deployment of Canadian troops shouldn't be discussed in Parliament, just as entry into the second world war was discussed, contrary to what the cartoonist would have us believe. Maybe the cartoon should read "Dieppe" instead of "D-day"

Oops, ain't nothing never gonna work long as we hold onto our conception of democracy. If we stay with the 'borrowed version', we're missing the truth. Our Iriqouis brothers and sisters retain the pure form (though not practised...hey, remember, they were conquered!!!). http://www.constitution.org/cons/iroquois.htm

That would be a great recruitment slogan!

"He went on to say that our troops were there to, "force peace on the people." Don't you love the irony of those statements?"

Yeah, I loved the irony of World War II. So funny.

Has the calgary crappaper printed any letters complaining about this cartoon? Doubt it, no one's better than buying the party line than the majority of Albertans (sorry, mr and ms Alberta)... Afghanistan is truly different than Iraq and is a potential success story -- however, the Yanks 'cut and ran' to conquer another country, and left a huge mess for the UN forces to sweep up. They also left the job of ridding the country of Al Queda and Taliban, instead leaving warlords and Pakistan's questionable military in charge of doing a lot of their work, who have made the most of their opportunities. But, of course, there were those weapons of mass destruction among the oil fields...
By the way, just saw a terrific movie that gives a serialized view as to what the US has created, called V for Vendetta... highly recommended~

snick let's sell out and come up with the new recruitment song. think, millilons of dollars, then haliburton would reqruit us....hey, if you're gonna prostitute yourself you may as well shoot for the stars...er, pardon the pun.