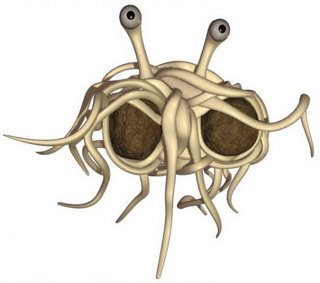 PR Web News reports the alarming possibility of a schism developing within the Church of the Flying Spaghetti Monster as two New Intelligent Design books with slightly differing visions are published simultaneously.

Founding Pastafarian Bobby Henderson, best known for his seminal work tracking the inverse relationship between global warming and the continuing decline in the numbers of pirates, has just released "The Gospel of the Flying Spaghetti Monster" through Villard Books. Expected to provide "an influential voice within the Intelligent Design debate plaguing school systems", Henderson is pledging all proceeds from the book towards the pirate ship fund, hoping to strengthen the movement that believes "the universe was created by a creature comprised largely of noodles".

"I feel that my constitutionally guaranteed freedom of religious belief is being unfairly discriminated against.
Obviously, if we have to pay taxes, we won't be able to afford as large or bad-ass of a pirate ship. I suspect they will find it harder to ignore us when we have the pirate ship, with cannons, etc"

A more spiritual approach is taken by Dr. Jonathan C. Smith in his handsomely bound volume "God Speaks! The Flying Spaghetti Monster in His Own Words". Using advanced computer techology and groundbreaking artificial intelligence software to produce a new form of anagrams called "spaghettigrams", Smith's goal is to “to inspire those of all beliefs to put aside the superficial prejudices, distorted thinking, and superstition that can cloud one’s vision and interfere with authentic spirituality.” 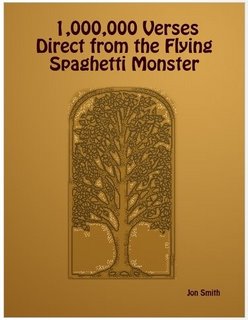 As PR Web News reports, "Whether or not the FSM movement, which has lobbied to be considered by school boards alongside other theories of intelligent design, will embrace Smith’s ideas remains to be seen."

Surely a movement which has so successfully straddled the scientific and religious and pirate disciplines will prevail over these minor semolina differences.

To read more about the FSM movement or to order Henderson's book, go here. Dr. Jonathan C. Smith's book can be ordered here.

" "It's too bad that they'll get attention for this sort of drivel when we have a robust scientific research program that the media doesn't seem to want to write much about," Discovery Institute spokesman Robert Crowther said in an e-mail interview. The Seattle-based institute is the leading think tank for intelligent-design advocates. "

Robust scientific research program? Sadly, the Discovery Institute does not seem to offer any courses on "Petard Safety and Handling".

Posted by Alison at 4:05 am
Email ThisBlogThis!Share to TwitterShare to FacebookShare to Pinterest
Labels: FSM, Intelligent Design

So the pasta flinging begins. But will it stick to the wall?

I should never read comments from Crowther with coffee in my mouth. Now I have to clean my screen.

Way too fucking long. I mean, I have to eat carbo-calm but do I have to read al-dente?