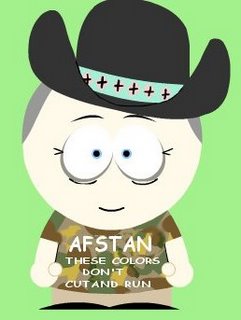 .
When Harper campaigned on 'transparency and accountability' in government, he actually meant 'invisibility'.

Having more or less successfully camouflaged the Conservative Party's nutbar candidates throughout the election, Harper has now issued a memo muzzling government officials and cabinet ministers from having any truck with the press that is not first cleared through his office. Interviews, letters, everything. They are to stick to the Five Noble Truths from the Conservative campaign and then shut up.

Two comments :
1) A gag order that is immediately leaked to the press gives us a pretty good idea of how well the gag order is going to be upheld.
2) By insisting on this level of control, Harper becomes accountable for any and all nutbar pronouncements from any of his nutbar candidates when they do go off-message. And you know they will.

So the question is : will the press allow themselves to be gagged?

Link at the Glib and Mall. More at The Galloping Beaver

Southpark Harper created at the quite wonderful Planearium, where you can assemble your own character from kooky preformed bits and pieces - more or less in the same fashion that the Conservative party was assembled.

Posted by Alison at 11:57 pm
Email ThisBlogThis!Share to TwitterShare to FacebookShare to Pinterest
Labels: Accountability

Reporters gagged? Bound, perhaps? I was going to say something inaapropriate about Christina Lawand in fetish gear, but that would be, well inappropriate. Or that's what my wife says anyway.

You just gotta love Harper's latest fashion edict for Ottawa (those cute little colour-coordinated "HarperMuzzles" so many Tories will be wearing for next few months). There is absolutely no truth to the rumour that the only permissible colour for the HarperMuzzles is blue. I have it on good authority that any primary colour will do, in fact, some expect Tory ministers to have a different colour for each day of the week! Now, that's being cutting edge!

But fear not, political discourse inside and outside the House will still find a way to bypass the HarperMuzzles and wander over the rest of the Harper New Tories agenda.

Then the true discussions will start on exactly what sort of Canada Harper wants to have.