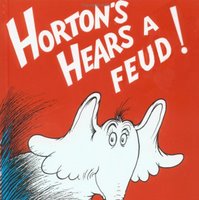 "There's a new claimant in the fierce battle over a discarded Tim Hortons coffee cup that is now considered precious property.
Two Quebec families have been battling over which of their daughters is the rightful owner of the coffee cup, which entitles the holder to a $28,700 SUV through the company's "Rrroll up the rim to win" contest.
But now a staff member from the girls' school has waded into the dispute, claiming the coffee cup belonged to him."
And now he's getting legal advice too.

A 10 year old girl found the cup in the trash and got her 12 year old classmate to help her roll up the rim of the cup to reveal the prize. They planned to have their families share the SUV and go to "Walt Disney".

"A person's a person no matter how small," said the Dr Seuss character, Horton.
But some adults are really really really small.
Link
Posted by Alison at 10:45 pm
Email ThisBlogThis!Share to TwitterShare to FacebookShare to Pinterest