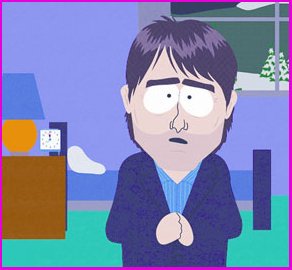 Sunday - the day we set aside to deal with religion ... and tabloids!

Tom Cruise! Southpark! Thetans!
Thetans? Yes, Thetans were in the news again this week after a Southpark episode mocking Tom Cruise and Scientology failed to air as scheduled due to interference from those pesky Thetans. Or Enthetons. Or Viacom.

You know I really tried to research this fairly but my engrams were blocking again so I'll just crib from Wikipedia and this Rolling Stone article on Advanced Level OTIII Scientology :

"75 million years ago, an evil galactic warlord named Xenu controlled seventy-six planets in this corner of the galaxy, each of which was severely overpopulated. To solve this problem, Xenu had psychiatrists round up 13.5 trillion beings by telling them they were being inspected for income tax and then froze them and flew them to Earth, where they were then dumped into volcanoes around the globe and vaporized with hydrogen bombs. This scattered their radioactive souls, or thetans, until they were caught in electronic traps set up by Xeno around the atmosphere and "implanted" by 3D movies with a number of false ideas -- including the concepts of God, Christ and organized religion. Scientologists later learn that many of these entities attached themselves to human beings, where they remain to this day, creating not just the root of all of our emotional and physical problems but the root of all problems of the modern world."

L Ron Hubbard also tells us the 13.5 trillion beings dumped here dressed very much like people from the 1950's and were transported to Earth in planes that looked exactly like the Douglas DC-8s from the 50's. Thetans are evidently very big on the 50's.

Meanwhile, Xenu is reputedly still locked up in that fiery volcano in Hawaii, or possibly the Pyrenees, while the rest of us try to free ourselves from enthetans (bad thetans) and regain our natural place in the universe as clear immortal beings.

Are you still there? Your head didn't fall off? Good for you. Obviously you're very highly evolved. Novice scientologists are warned that they risk death by reading that passage before they are ready to receive it. Or before their bank accounts are overdrawn, whichever happens first.

So - an ancient intergalactic battle between good and evil skygods in which the bad skygod is banished to the fiery bowels of the earth while disembodied souls attempt to cleanse themselves of earthly dross in order to be reunited in everlasting bliss with the good skygods.

And you call this a religion? Feh. A ridiculous story like that could never catch on as a religion.

In closing, I leave you with the immortal words of L Ron Hubbard, the man who will lead the world to the Way of Truth : "If a man really wants to make a million dollars, the best way would be to start his own religion."

And if you want to catch that Southpark episode with its handy Scientology primer, go here.
Posted by Alison at 11:22 pm
Email ThisBlogThis!Share to TwitterShare to FacebookShare to Pinterest

Okay, I'm completely confused. Where does Anakin Skywalker fit into all of this?

And even the nuttiest Star Wars fan is firmly grounded in reality compared to some Scientologists (and, it must be said, to some members of "mainstream" religions).

We shouldn't even be talking such blasphemy. May Yoda have mercy on your soul.