Giving thanks for love and guts

Thanks to Ross at The Gazetteer for a wonderful link to the one-man Free Hugs campaign. For two and a half years, Juan Mann has been holding up a sign in Sydney Australia that says "Free Hugs". And freely giving them. When advised by Sydney council that he would have to post a $25 million public liability insurance bond to be allowed to continue, he gathered 10,000 signatures of support and Sydney council backed down.
So - 10,000 signatures trumps $25 million then.
The YouTube counter shows over 2 million hits so far, with spin-off Free Hugs campaigns in Tel Aviv, Taiwan, Toronto ... All from a one-man campaign.

We all have the power - we just have to use it.

Sven certainly did when he made this bold one-man protest at the Peace Arch : Enter at Own Risk
http://www.youtube.com/watch?v=SoJ_ua7vTjs

So do the more than 1600 Israeli Refuseniks, soldiers who selectively object to military operations on the West Bank and Gaza.
"The time I spent in jail was the most important time I served for my country, for my friends in my unit, for my family, for the security of Israel." - Major Chen Alon.

Tomorrow and Thursday, "Raised To Be Heroes" by islander Jack Silberman with cinematography by Rudi Kovanic is showing in Vancouver as part of the Vancouver Film Festival. 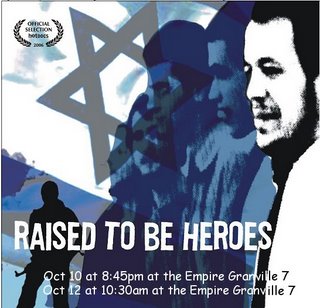 Thanks to Silvaine Zimmerman, International Green Party Rep, for the heads up.
Posted by Alison at 5:16 pm
Email ThisBlogThis!Share to TwitterShare to FacebookShare to Pinterest

That Sven has some balls to go out there and do that on his own. Even on the Canadian side of the border, I wouldn't have had the guts.
I'd forgotten the Peace Arch sign says "Brethren Dwelling Together in Unity". Just seems ominous now.
The Democrits voted for the Military Commissions Act too, remember. I can't believe people aren't rioting in the streets down there.

Tim :
It's because
1) they're pretty sure no American citizens will be affected by it and
2) they don't know what habeas corpus is anyway and
3) the media has absolutely sucked on this - up here too - and
4) someone they've never met who makes a lot of money on tv is getting married/divorced/pregnant/charged with DUI/a brazilian/an award/fat, so what's to miss?
Besides, the bullshit Foley story is just sooooo much sexier.

Nice little holiday link to the Free Hugs guy, Alison. I blubbered like a baby.