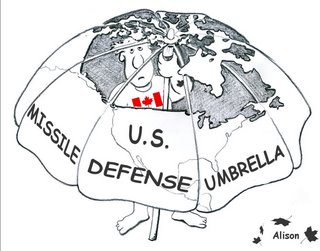 A senate defence committee report released Thursday says Canada should sign on to the U.S. ballistic missile defence program.
Because signing on to a program that can't even pass its own tests on a good day under ideal conditions in that sink hole of escalating pre-emptive militarization and weaponization of space that is the flagship of U.S. diplomacy just seems like the right thing to do.

Here's a better test of Canadian security for you - How many Canadian students travelling abroad sport a US flag on their backpacks?

To be fair, the Senate Defence Committee also advises doubling the amount of money we assign to foreign aid :
"The likelihood of reducing world turmoil through military responses is a mug's game. Force won't work on its own."

Yeah, well, they got the first sentence right.

Link. Much better coverage of this at No BMD, eh?
Posted by Alison at 4:43 pm
Email ThisBlogThis!Share to TwitterShare to FacebookShare to Pinterest

A most excellent cartoon. You should submit it to Macleans or the High Tide.