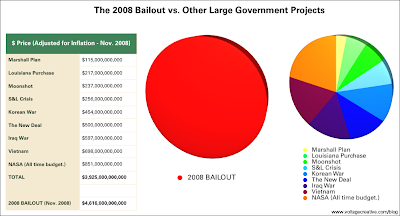 Earlier today I saw this handy click-to-enlarge pie chart at Boing Boing from Voltage Blog
The pie on the right includes the Marshall Plan, the Louisiana Purchase, the moonshot, the S&L crisis, the New deal, NASA, and the Korean, Vietnam, and Iraq wars, for a total of $4.6 trillion.
On the left we have the slightly larger 2008 bailout pie.
But then tonight I read at Bloomberg : Nope, it's not $4.6 trillion, it's $7,700,000,000,000.
At $24,000 for every man, woman and child in the US, it could pay off more than half their mortgages.
Bob Eisenbeis, economist for the Atlanta Fed for 10 years, on the lack of government oversight : "They got snookered."
But these are just loans, right? The companies will pay the taxpayers back when ... when ....
Holy crap! Isn't this the part in the movie where the seasoned old cop/FBI/CIA guy tells the anxious victim not to submit to blackmail/ransom/terrorist's demands because they will never stop their demands no matter how much you pay them and besides if you give in they're just gonna kill you/your wife/your country afterwards anyway?
Commenter Frank W at Boing Boing : "Money is a meme. It consists of the belief in it. That does not mean it does not exist, just that it consists of the belief in it. So, here's a pretty picture of a unicorn."
Posted by Alison at 9:42 pm
Email ThisBlogThis!Share to TwitterShare to FacebookShare to Pinterest
Labels: $7.7 trillion bail-out, money money money

The printed number is sobering to say the very least but when drawn in comparative pie form the visual is even more staggering.
I always find it odd when incidences of program expenditure or American taxpayer abuse are sited these days and few seem to mention the 2.3 trillion dollars the Pentagon announced as lost down the rabbit hole on September 10, 2001.
I guess that's "unpatriotic" or perhaps "conspiracy" minded.

Fox : And now we know that pie on the left should be twice as big.

Re missing $2.3 trillion : I'd forgotten about that! CBS still has coverage up of Rumsfeld disclosing that imfo from Jan 2002.