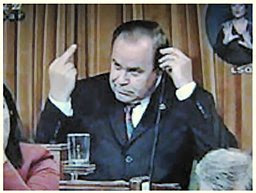 With pledges of renewed civility in the House.

"I agree that decorum has gone down somewhat,"admitted previous Speaker of the House Peter Millikin, in what must be described as an underunderstatement.

"We want to be very serious," pledged Jay Hill, the new Conservative House leader who took over the position from Peter Van Loan, famous, along with his compatriot Pierre Poilievre, for his fondness for using sign language in the House.

Gone will be the parliamentary practise of responding to the opposing party's arguments by making an L on one's forehead with thumb and forefinger. Never again will Con MP Royal Galipeau, himself a contender for Speaker of the House up till an hour ago, storm the Liberal backbenches to grapple with Lib MP David McGuinty.

Personally I think this proposed civility thing is a big mistake. Arm the buggers, I say! Break out the parliamentary catapaults! Build a moat in the aisle and fill it with green jello. I fart in your general direction! Your mother was a hamster and your father smelt of elderberries! Fetchez la vache!

Picture ripped off from Ottawonk