CBC poll : Yo! Canadians! Listen up! 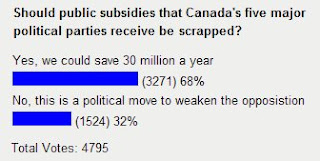 From a live CBC online poll.

In 2003, Jean Chretien reduced the influence of special interest groups on elections by banning corporate and union donations. Private donations are capped at $1100. Arguably the best thing he ever did for Canada.

To compensate for this loss of funding, all parties who receive 2% of the vote are paid a $1.95 taxpayer subsidy per vote received, reducing the winner-take-all lopsidedness of our dumb ass first-past-the-post electoral system.
Without it the Greens would disappear, the NDP would have a much smaller voice, and fundraising would become the all-encompassing election issue it is to the south.
Very convenient for whoever is in power at the time to have fewer dissenting voices in opposition.

This morning the Cons have backed down from pretending that stripping political parties of their public financing is somehow for our benefit.
Too late, jerk offs. Chretien and Broadbent are right now brokering some kind of coalition between the Bloc, the Libs, and the NDP. Good. It's a start.
Posted by Alison at 9:01 am
Email ThisBlogThis!Share to TwitterShare to FacebookShare to Pinterest
Labels: CBC, election, first-past-the post, polls

They should move ahead with the coalition. Harper's proven he doesn't have the maturity to govern.

They are!
"The Liberal motion, which has the approval of the NDP and Bloc Quebecois, reads:

"In light of the government's failure to recognize the seriousness of Canada's economic situation and its failure in particular to present any credible plan to stimulate the Canadian economy and to help workers and businesses in hard-pressed sectors such as manufacturing, the automotive industry and forestry, this House has lost confidence in this government and is of the opinion that a viable alternative government can be formed within the present House of Commons."

A source says the opposition parties have agreed that Liberal Leader Stephane Dion would lead the government for the next few months.

A combative Finance Minister Jim Flaherty said Friday the government won't back down on a single measure, despite the opposition threats.

"This is the financial plan of the government of Canada. This is a matter of confidence."