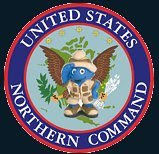 Sea Smurfs was the mercifully shorter nickname given to NorthComm's 3rd Infantry Division’s 1st Brigade Combat Team, the Consequence Management Response Force. It's also become known as Bush's private army because, as reported in Army Times, they have been deployed inside the US to deal with "homeland scenarios" and "may be called upon to help with civil unrest and crowd control".

Yeah, yeah, I know, the Posse Comitatus Act and all that, but Bush attached a little note to the repeal of its repeal last year, if you can follow that, to say he does not feel bound by it.

Reporting on a National Homeland Defense and Security Symposium in Colorado last week, the Colorado Independent newspaper tells us the Sea Smurfs are about to grow by at least two more military units over the next two years, bringing their number to an estimated total of 4,700.

Yeah, well , they've got tanks and guns too and they'll be "using military tactics, including some tested in Iraq". which is where these smurfs have just hailed from.

As we discovered back in February : "Canada and the U.S. have signed an agreement that paves the way for the militaries from either nation to send troops across each other's borders during an emergency".

The definition of just what would constitute "an emergency" continues to worry me.

Good little vid on one man's reaction to the Sea Smurfs from ACR.

Watching the increasingly militarized response to civil dissent both in the US and Canada (e.g. Montebello, Que. and the proposed 'security' for the Vancouver OlympicsTM), I can't help but think of the dreadful and horrific nastiness in store for us as the DND is busy acquiring equipment documented in the following places:
direct energy weapons used in Iraq

WB, yes. Plus at the 8th Conference of Defence Ministers of the Americas held in Banff this year, the US State Dept rep recommended "the need to create a multi-nation disaster task force."