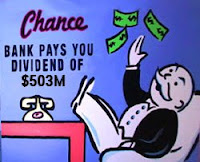 Naomi Klein :
"Washington's handling of the bailout is not merely incompetent. It may well be illegal.
According to Congressman Barney Frank, one of the architects of the legislation that enables the deals, "Any use of these funds for any purpose other than lending -- for bonuses, for severance pay, for dividends, for acquisitions of other institutions, etc. -- is a violation of the act." Yet this is exactly how the funds are being used."
American International Group Inc. got an expanded $150 billion government bailout this week, and is setting aside $503 million in compensation for executives.
Bloomberg : "The Treasury has committed $290 billion of the $350 billion already allocated through capital injections to banks and AIG. The four attending members of the House Oversight and Government Reform Committee's subcommittee on domestic policy accused Treasury of picking "winners and losers'' by giving loans to healthy banks to use in buying smaller ones."
"This administration wants to privatize Wall Street’s gains and socialize Wall Street’s losses," said Rep. Elijah Cummings, D-Md.
"I believe that banking institutions are more dangerous to our liberties than standing armies. If the American people ever allow private banks to control the issue of their currency, first by inflation, then by deflation, the banks and corporations that will grow up around [the banks] will deprive the people of all property until their children wake-up homeless on the continent their fathers conquered. The issuing power should be taken from the banks and restored to the people, to whom it properly belongs. ~ Thomas Jefferson, 1802
Posted by Alison at 5:07 am
Email ThisBlogThis!Share to TwitterShare to FacebookShare to Pinterest
Labels: corporate welfare, money money money, Naomi Klein, Wall Street